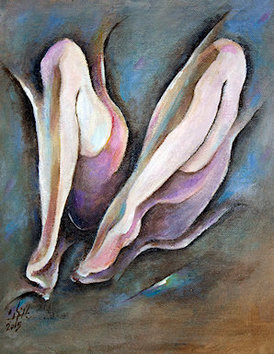 Life experience, with all its joy and agony, gives shape to our souls. The ambiance, the background, is the stencil of the spirit; the formwork where one has been made and to which one belongs.

The body, as foreground, is the vessel of our soul.  It never lies, it has no masks, and it expresses the deepest of the emotions. A simple gesture can tell who a person is, and what he feels instantly.

Through my curves, colors, and forms, I embed the feeling I encounter when making the art piece. What lies within the boundaries of the frame I hang, is my soul that passes the emotions I felt to the spectator. The creation process never stops at the production of the piece, as the last is nothing but a transformation of the emotion, from the intangible to the physical. After the art work gains its birth it starts to live its own life, and evolves and rises through the eyes and the generated emotions of the receiver.

We are born to express our backgrounds, and if two dimensional eyes do not enable us to see then maybe we should use some 3D helpers, to realize what lies beneath once and for good.

Personality does not generate from scratch or singular circumstance, but rather from what a person been through. Coincidence, spontaneity, is our only God, creator of both our transient feelings and long lasting passions.

The works are deeply expressive, and emotionally charged as the figure’s assimilation of, and into, the fields of color that form her immediate context challenge her primacy, her very definition, and introduce the subtle ambiguities that that give rise to her interrogation. The figure’s stylistic engagement, her very fusion with foreground and background, present a uniquely fluid visual state in which interpretation is held in suspension and abeyance. 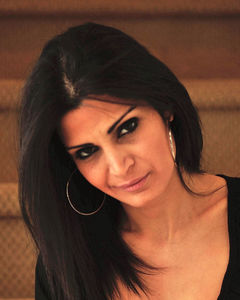 Ban Kubba was born in Baghdad, Iraq in 1971. She earned a Master degree in Architecture. With several courses in art, she was devoted to watercolour since the start of her art career. Her first exhibition in Baghdad in 2001 was a reflection of the Iraqi tradition scenes, where the voice of the artist is almost muted, and the only colours you catch from her paintings  are those of the effect the culture had on her soul.

After three wars, she left Iraq and resided for several years in Dubai, UAE where she had her second solo exhibition and contributed to the art movement in several galleries. The effect of wars on her paintings was so clear in several of her work series to heal her soul from the traumatizing effect of her home country disaster. Her art in Dubai was not so welcomed in public exhibitions because of the cultural and religious restraints. Her paintings were censored; she had to pull down several exhibitions after preparing for the openings, and was often asked to choose between changing the subject and finding some other region to exhibit her watercolour art work.

Moving to BC, Canada in 2010,  she was introduced to the West Coast art and sensed its impact on her soul which can be seen in her early works of 2011. Ban joined several art courses at Emily Carr University of Art to be acquainted with the rich culture of the West Coast.

Ban has several contributions in art exhibitions all around the world including Europe, The Middle East and The United States. Her subject was always identified with the internal conflict of the woman’s soul which is expressed through the symbolism of the nude bodies, undefined lines between the foreground and background, and the mysterious faces of the women she painted. Through her figurative symbolism, the internal emotions, society, and culture were all expressed in a simple yet deep definition.

Ban's work is currently on display at Silk as part of the Gallery's latest show, La Femme
La Femme is open from May 1 - June 10.